Momentum grows for effort to preserve Black and Jewish history 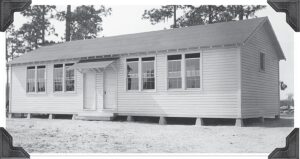 The Okahumpka “Rosenwald” School as it looked in 1930.

The rural Florida community of Okahumpka thas taken two big strides this summer toward the goal of preserving a piece of Black history that a Jewish benefactor made possible nearly 100 years ago.

The most recent event, in mid-July, was an announcement that the African American Cultural Heritage Action Fund, a program of the National Trust for Historic Preservation, presented a grant of $100,000 to aid in restoring the Okahumpka Rosenwald School, located about 75 miles northeast of Tampa in Lake County. That comes on the heels of an announcement in June from the Florida Department of State that the Okahumpka Community Club – the organization trying to restore the school – was approved for a $499,890 African American Cultural and Historical grant.

While one might think the combination of the two grants would be enough to complete the restoration, as well as a new community center on the grounds, Okahumpka Community Club fundraising chair Chip D’Amico says that is not the case, as a lot of work to the grounds – a paved driveway and parking lots, sidewalks, moving a power line, removing trees and code-compliant landscape buffers and improvements – can’t be used by the funds earmarked by the grants. So, the work of fundraising continues.

The $100,000 national grant is part of $3 million in funds presented for different projects throughout the nation to help preserve Black history. The most notable of the grants awarded in July was $150,000 to aid in restoring elements of the childhood home in Chicago of Emmett Till, a 14-year-old Black youth who was lynched in 1955 in Mississippi after he was accused of whistling at a white woman.

Only 33 of the 627 applicants for funding were approved.

The Okahumpka school, completed in 1930, is among only a handful of “Rosenwald” schools remaining in Florida and was in a state of disrepair. The schools got their “Rosenwald” nickname in recognition of Julius Rosenwald, who in 1912 was president of Sears Roebuck & Co. That year he visited his friend Booker T. Washington at the Tuskegee Institute in Alabama. At the time, the state of education for Black children throughout the Jim Crow South was abysmal, a fact the men discussed. At that meeting, the men hatched a plan to build state-of-the art schools for Black children.

It began as a pilot project in Alabama but eventually spread to 15 states across the South. Rosenwald offered major funding for the project, which resulted in more than 5,000 “Rosenwald Schools” for Black students including 120 in Florida. At the time, for many Black children it was their only opportunity to get an education.

Following implementation of the 1954 Brown v. Board of Education U.S. Supreme Court ruling to desegregate schools, the Rosenwald schools became obsolete, and many were abandoned, demolished or moved into private hands. Florida schools were not fully integrated until 1970.

In 2021, the non-profit Okahumpka Community Club, which owns the building, began a GoFundMe campaign to restore the school. The group also made applications for restoration grants and for designation of the old school building on the National Register of Historic Places. It achieved that designation in January.

This project is to fully restore the Rosenwald School for displaying the history of Julius Rosenwald, Booker T. Washington and Okahumpka native citizen and Florida civil rights leader Virgil D. Hawkins, Esq. Plans also include building a new support facility with restrooms and meeting space for visitors, which will double as the Okahumpka Virgil Hawkins Community Center.

Exhibits explaining the history of the school and Hawkins will be on display there. Hawkins conducted

1949-1958 court battles that finally resulted in desegregation of the University of Florida. His parents donated half an acre of land the school sits on.

The funding has not come only from grants. Early on, before any grants were approved, word of the project to restore the school got out. Among early supporters to help uphold the legacy of philanthropy by a famous Jew – Rosenwald – the Jewish American Society for Historic Preservation paid for historical markers to be erected on the site. The markers explain the history of the school and give some biographical information on Rosenwald. One member of that society has remained a consistent donor, D’Amico said. Donations can be made at GoFundMe at: gofund.me/d161b675