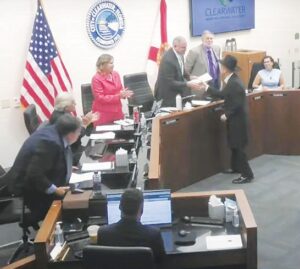 Tuesday, April 12 marked the 120th birthday of the Lubavitcher Rebbe, Rabbi Menachem Mendel Schneerson, of righteous memory, and to mark the occasion, Clearwater Mayor Frank Hibbard issued a proclamation marking the day as “Education and Sharing Day” in the city.

At the Clearwater City Council meeting on April 7, the mayor read the proclamation and presented it to Rabbi Levi Hodakov, director of Chabad of Clearwater. Similar proclamations were issued by public officials across the United States.

In part, the proclamation read, “in recognition of the Rebbe’s outstanding and lasting contributions toward improvements in world education, morality and acts of charity, he was awarded the Congressional Gold Medal, and the United States Congress established his birthdate as a national day to raise awareness and strengthen the education of our children …”

For more than 40 years, presidents, Congress, and local governments have recognized the date corresponding to the Rebbe’s birthday on the Jewish calendar as Education and Sharing Day.