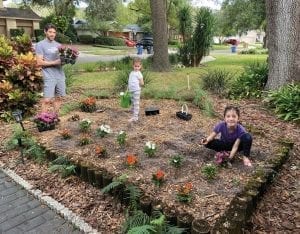 Oren Milstein and his daughters planting flowers in the front yard of their new home in Tampa.

Two Israeli businessmen who first came to Tampa as part of the Florida-Israel Business Accelerator (FIBA) program have found a home here – not only for their companies, but also for their families.

The idea was that moving to Tampa would make it easier to establish markets for their companies in the United States, and that seemed to be working until COVID-19 put a wrinkle in their plans. Both men feel their companies – and their families – will get past this, however.

Dr. Oren Milstein, co-founder of StemRad, and Tomer Schatzberger, CEO of UC-Care (USA), left Tel Aviv and brought their families to Tampa late last year. Prior to moving here, the two Israeli businessmen had been regularly visiting their Tampa offices and employees. The thinking went that moving to Tampa would allow them to be more involved in their companies while giving their families a chance to explore, make connections, and establish roots here.

FIBA, based at the Bryan Glazer Family JCC in Tampa, was formed in 2016 and invited its first group of Israeli start-up companies in early 2017 – StemRad among them – to use office space at the JCC. FIBA helped introduce them to local investors and other business officials in an effort to help the startups establish U.S. markets. Each year since then, FIBA has continued to invite new groups of Israeli companies to Tampa with hopes they will set up operations locally. UC-Care was in FIBA’s 2018 group.

With StemRad getting ready to launch new medical products – initially in four Florida hospitals and eventually making a national launch – Oren Milstein decided it would be best for him to be physically close to his company’s work here, so in December, he, his pregnant wife Sivan, and two daughters, 4 and 8, relocated to the Tampa Bay area.

The whole family was excited about the move, he said. His daughters were enrolled at Hillel Academy in Tampa and were improving on their English.

Then the coronavirus hit.

That has meant a switch to distance learning. “The parents really have to pitch in and fill in for the loss of school,” said Milstein. “We’ve been trying. The hours in front of the TV have grown exponentially, but that’s hard to get around in isolation.”

Another complication in the family’s move from Israel was wife Sivan’s pregnancy, which meant immediately navigating the American health care system.

In the face of the coronavirus threat, Sivan has had to be very careful – wearing a mask and gloves – when taking the infant to the pediatrician for his regular well-baby check-ups.

“The doctors have been very considerate,” Milstein said.

Leo has been gaining weight, almost doubling in size in less than two months, and was the earliest of Milstein’s three children to start smiling, he said.

Even with the social distancing requirements, Milstein said the family are also getting to know their neighbors.

“Everyone’s outside taking walks and stopping to talk, but being considerate of distance,” said Milstein. “The social life in the neighborhood has improved. There’s even a nice Jewish family down the road who brought bagels to our door before Passover.”

Milstein’s office in Tampa took a proactive stance in shutting down and closed in mid-March and the entire StemRad company is operating online only.

“I would say that COVID-19 has given us more quality time as a family and actually brought me closer to my team in Israel, as the mindset has shifted to online work, so geographical distances are not an issue, as they were before the pandemic,” said Milstein.

“Being an Israeli, I was on edge very early,” said Milstein. “I started stocking up in late February, buying essentials for the baby. I made sure we had enough to support us, and we’ve been restocking when we can. That’s the survivalist, Israeli side of me.”

Milstein has been staying connected with his Israeli family and friends through Zoom video calls every day, and they even eat meals together via video chats, although lunchtime here is dinnertime in Israel.

The virus didn’t stop Milstein’s immediate family from celebrating Passover this year. They had a cozy seder at home. “I observe the holidays more from afar here in the US, and especially during these challenging times, than what I had in Israel,” said Milstein. “I took the tradition for granted. It’s something inspiring to be a part of the tradition, especially when things are so vague and unclear. It provides a foundation.”

Travel was a hassle

The good weather, ease of connection to Europe and South America, and the relationship with FIBA all influenced Tomer Schatzberger’s decision to relocate to Tampa, he said.

It was becoming difficult to travel back and forth between Israel and Florida every two weeks and moving here made Schatzberger more accessible for decision-making, hiring and participating in meetings. All that had an immediate positive impact on his business.

Plus, Schatzberger hoped that bringing his family to Tampa would present new experiences for his wife and four children.

“I enjoy that the kids are learning English and are exposed to different lifestyles. I think this change will build them. My wife and I both moved to the States as kids for a few years, and we both got a lot out of it. I expect and wish for my kids that they will get a lot out of it, too.”

Before stay-at-home orders were issued due to coronavirus, three of their children were either attending Roosevelt Elementary School or Coleman Middle School, while their 1-year-old child was at home. The three older kids are doing online school now.

“They are coping with it and making some adjustments, especially for the first grader, because of the English barrier,” said Schatzberger. “The two older kids cope. They’re getting a lot of work done and progressing on their English, but they’re not making friends or socializing, not like if they were there.”

Schatzberger said the kids communicate in Hebrew among themselves. He hoped they’d have a better grasp of English by now.

The children also miss their friends in Israel. The kids used to spend a lot of time playing with their cousins and friends in Israel, but now, their interactions are limited to Skype and WhatsApp.

His son joined a local soccer team to cultivate new friendships, but team play is on hold for now.

For Passover this year, Schatzberger’s family tuned into two video call seders with both sides of the family, before having their own seder.

“COVID-19 does impact our family life, like everyone else, and the business has significantly slowed down, as we are in the medical industry and almost anything that is not COVID-19 is postponed, even most of the cancer diagnosis and treatment procedures,” Schatzberger said.

UC-Care is a medical device company that offers solutions for prostate cancer diagnosis and treatment. According to Schatzberger, the market in the United States is more lucrative for tech and medical companies, so he decided to open a subsidiary in the U.S. The company is working to raise money so the business can continue fast-paced growth in 2020, according to Schatzberger.

“Due to the good traction we’re seeing in the current market and now that I’ve moved here and can really build the company, we’re seeing lots of good interest,” said Schatzberger in an interview before the virus hit.

COVID-19 has presented difficulties for Schatzberger, but he said he is hopeful that he’ll be able to return to normal life again soon.

StemRad develops and manufactures protective equipment that keeps humans safe from radiation. The technology can be used both in space and on Earth, in medical environments. In 2013, StemRad was one of the winning teams in a $2 million joint Florida-Israel program to support aerospace and technology projects. This is how StemRad caught the attention of FIBA, which reached out to help facilitate the company’s entrance in the U.S. market.

StemRad had already developed a few products, but wasn’t strong in selling them yet, according to Milstein. In 2017, he came to Tampa for three months and found a group of Tampa investors, led by Tampa Bay Lightning owner Jeff Vinik, who chipped in $6 million. The investments helped propel the company forward and their hiring process in America began.