In rare occurrence, Reform rabbi to be knighted by pope 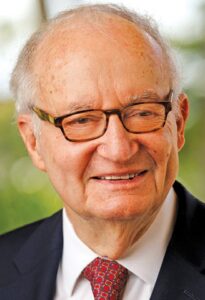 Rabbi A. James Rudin will receive the knighthood during a Saint Leo University ceremony.

A. James Rudin, a leading Reform rabbi and educator and co-founder of Saint Leo University’s

Center for Catholic-Jewish Studies (CCJS), will be knighted under the Papal Order of St. Gregory for his work on Catholic-Jewish relations, with the ceremony taking place at the Pasco County university on Sunday, Nov. 20.

It is only the third time in history that a pope is bestowing the St. Gregory knighthood honor to an American rabbi and the first time in the papacy of Pope Francis.

Cardinal Sean Patrick O’Malley of the Archdiocese of Boston will represent Pope Francis and conduct the investiture ceremony. The public is invited to the ceremony beginning at 1 p.m. Reservations are required. RSVP to Dr. Matthew Tapie, director of Center for Catholic Jewish Studies, at matthew.tapie@saintleo.edu.

The ceremony also will be available via livestream at saintleo.edu/papal-knighthood.

“For more than 50 years, Rabbi James Rudin has worked to advance Catholic-Jewish relations, and interfaith relations on a wider scale, with extraordinary skill, dedication, and success,” Cardinal O’Malley said. “We are all blessed by Rabbi Rudin’s achievements in promoting dialogue and collaboration among communities of different faiths. The impact of this work continues to grow as successive generations build on the foundation Rabbi Rudin has established.”

The cardinal noted Rabbi Rudin’s many years of close working relationships with Cardinal John O’Connor in New York and Pope Saint John Paul II. Rabbi Rubin is the longtime director of interreligious affairs at the American Jewish Committee (AJC) and a distinguished professor of religion and Judaica at Saint Leo University. He currently lives in Fort Myers.

Earlier this year, Rudin, 88, published a memoir, “The People in the Room: Rabbis, Nuns, Pastors, Popes, and Presidents,” which recounts his many trips abroad during his time working at the AJC as part of his work to improve Jewish-Christian relations in the years after the Holocaust.

He was a member of the Camp David Presidential Retreat Chapel Committee and co-founded the National Interreligious Task Forces on Soviet Jewry and Black-Jewish Relations. Besides Pope John Paul II, Rabbi Rudin met many times with Pope Benedict XVI and was the guest of honor at the 1994 Vatican event commemorating the Holocaust.

In his memoir, Rudin recounts how growing up in Alexandria, VA, among Southern Baptists, he and his Catholic classmates were singled out during a class reading on the New Testament and asked to leave the room.

After graduating from rabbinical school at Hebrew Union College, Rudin served as an Air Force chaplain in Japan and Korea, where he befriended a Catholic priest with whom he partnered to lead Catholic-Jewish programming.

The importance of that interchange of ideas prompted the formation of Saint Leo University’s Center for Catholic-Jewish Studies in 1998 when Rudin said, “I noted that Florida had an increasing population of Jews and Catholics, and that dynamic demographic trend was likely to continue. There was no Christian-Jewish academic center south of Baltimore at that time.”

Rudin met with then-college president Arthur Kirk Jr., who liked the rabbi’s proposal of creating an interreligious center on campus. Kirk, Rudin, and Bruce M. Ramer, then-president of the American Jewish Committee, signed a joint statement establishing CCJS. The founders recognized the need in the state for an academic center devoted to the biblical and theological study of Catholic-Jewish relations and interreligious dialogue, as emphasized by the Second Vatican Council.

Rabbi Eric J. Greenberg, director of the United Nations relations and strategic partnerships for the Simon Wiesenthal Center, helped nominate Rudin for the honor and said, “This knighthood clearly demonstrates the evolving positive relations between Catholics and Jews.”

He noted that the papal honor, “comes at a crucial time when Jews are under assault around the world.”

Information from JTA was used in this report.