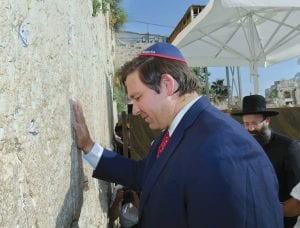 Florida Gov. Ron DeSantis prays at the Western Wall. About 100 political leaders, business people and educators accompanied the governor on his first foreign trip, May 25-31.

With more than 100 fellow bipartisan politicians and businessmen in tow, Gov. Ron DeSantis made his first foreign trip since taking office to Israel, leading a business development mission and holding the state’s first ever Cabinet meeting on foreign soil.

He also visited a West Bank settlement, the first official trade mission beyond “the green line” by a U.S. governor, according to the Jerusalem Post.

The trip, May 25-31, was organized in conjunction with Enterprise Florida, Inc.

In addition to the Cabinet meeting and visits to numerous Israeli businesses and cultural, religious and historical sites, DeSantis and cabinet members met with Benjamin Netanyahu on the day after the Israeli prime minister failed to form a governing coalition, triggering another election. 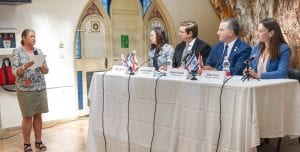 At their ceremonial Cabinet meeting at the U.S. Embassy in Jerusalem, (L-R) Attorney Gen. Ashley Moody, Gov. Ron DeSantis, CFO Jimmy Patronis and Nikki Fried, Commissioner of Agriculture. Miriam Fuld, far left, the wife of Ari Fuld, an Israeli American man who was killed in a terrorist attack beyond the Green Line in September 2018, discussed the need to stand strong against terrorism. Ari Fuld, a 45-year-old father of four, was stabbed by a Palestinian teen outside of a shopping mall.

Among his activities, DeSantis prayed at the Western Wall where he placed two prayers, one for Florida’s safety this hurricane season and the other from a Panhandle girl who lost her house in Hurricane Michael, according to the South Florida Sun-Sentinel.

The governor also planted a tree at the Kennedy Peace Garden, laid a wreath at Yad Vashem and delivered the keynote address to the 2019 Israel-American Business Summit.

He established more than 20 strategic partnerships and Memorandums of Understanding (MOU) between Florida institutions and ones in Israel. The MOUs included agreements between leading universities in Florida and Israel, as well as an extension of the Florida- Israel Innovation Partnership and a new pact between Space Florida and the Israel Space Agency.

“This historic mission has been the prelude to future prosperity and partnership between Florida and Israel. We established an unprecedented number of alliances in science, business and academia. We affirmed our solidarity with Israelis and resolved to give no quarter to anti-Semitism,” DeSantis said.

“Returning to Florida, we bring with us prospects for investment, high-wage jobs, water conservation and innovative ideas to keep our schools and communities safe,” he said. “We also carry home a renewed belief that peace, freedom and democracy are essential to our quality of life and are to be championed, cherished and never taken for granted.”

When DeSantis crossed the “green line” into the West Bank, he visited an Israeli settlement in the Gush Etzion region. There, he held talks with Israeli officials about the BDS (Boycott, Divestment, Sanction) movement against certain Israeli businesses. The governor criticized BDS as unfair to Israelis and heard from Israeli officials who said the movement actually does harm to Palestinians.

It was during that visit that DeSantis said he would remove Airbnb from the state’s blacklist of companies to do business with. The removal from the list came because Airbnb reversed a policy of refusing to list rental units in Israeli West Bank settlements (see related story, page 9).

Also while in the West Bank, the governor visited Ariel University and was presented with an Honorary Fellowship Award “for his dedication, leadership and commitment to the state of Israel.” Those present at the ceremony included American philanthropists and Republican mega-donors Sheldon Adelson and Dr. Miriam Adelson.

“This recognition means a lot and I am humbled to be the recipient. Let it be known that Florida will always stand with Israel, our greatest ally in the Middle East,” DeSantis said.

Among other mission highlights are:

A number of meetings with government officials were held to strengthen the ties and synergy between Florida and Israel. In addition to his meeting with Netanyahu, he held a joint press conference with Gilad Erdan, Israel Minister of Public Security, Strategic Affairs and Information. DeSantis also received a briefing from Yuvel Rotem, Director General of Israel’s Ministry of Foreign Affairs. DeSantis met with U.S. Ambassador David Friedman and the Florida delegation attended a reception at the ambassador’s residence in Tel Aviv.

More than 10 meetings and events with Israeli companies and business leaders to recruit new investments and bring high-wage jobs to Florida. Among the companies visited were Rafael, a military and defense technologies development firm; Cellebrite, a digital intelligence platform developer; Israel Discount Bank, a financial services firm with commercial services as well as private domestic and international banking; Nobactra, an agricultural research firm specializing in plant disease solutions, including citrus greening – a topic of key importance to Florida; Stemrad, which specializes in protective equipment for radiation and opened operations in Tampa after coming to the Bay area through FIBA.

The governor also led a roundtable talk on school safety and security, with Florida and Israeli officials participating. Legislators on the trip have said they are looking into adding safety features they saw at Israeli schools such as having only one entry point with security stationed there.

There was also an agreement between Florida and Israel’s Ministry of Tourism to increase bilateral tourism. Yet another pact was made between the Florida Chamber of Commerce, the Israel-American Chamber of Commerce and the Federation of Israeli Chambers of Commerce to promote greater cooperation, strategic partnerships, and trade and investment between Israel and Florida.

Still another pact addresses collaboration between Florida and Israel in the field of emergency management.